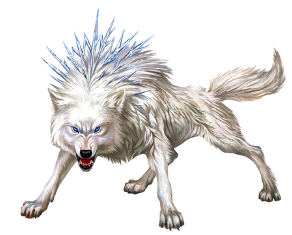 Attack and Attack Any Target [2x Trick] The animal attacks apparent enemies. You may point to a particular creature that you wish the animal to attack, and it will comply if able. Normally, an animal will attack only humanoids, monstrous humanoids, giants, or other animals. Teaching an animal to attack all creatures (including such unnatural creatures as undead and aberrations) counts as two tricks.
Come [Trick] The animal comes to you, even if it normally would not do so.
Darkvision (60 feet) You can see in the dark (black and white only).
Defend [Trick] The animal defends you (or is ready to defend you if no threat is present), even without any command being given. Alternatively, you can command the animal to defend another specific character.
Devotion +4 morale bonus vs enchantment.
Down [Trick] The animal breaks off from combat or otherwise backs down. An animal that doesn’t know this trick continues to fight until it must flee (due to injury, a fear effect, or the like) or its opponent is defeated.
Evasion No half damage on succesful Reflex save.
Guard [Trick] The animal stays in place and prevents others from approaching.
Heel [Trick] The animal follows you closely, even to places where it normally wouldn’t go.
Low-Light Vision See twice as far as a human in dim light, distinguishing color and detail.
Mobility +4 Deflection AC bonus vs movement provoked attack of opportunities.
Scent (Ex) Detect opponents within 15+ ft. by sense of smell.
Seek [Trick] The animal moves into an area and looks around for anything that is obviously alive or animate.
Spell Resistance (12) You have Spell Resistance.
Spring attack Move, melee arrack, move without AoO from the target.\\ Trip Can make a trip attempt on a succesful attack.
Winter Breath 1 per day, 15-ft. cone, 6d6 cold damage, Reflex half DC 17)
Hero Lab and the Hero Lab logo are Registered Trademarks of LWD Technology, Inc. Free download at https://www.wolflair.com Pathfinder® and associated marks and logos are trademarks of Paizo Inc.®, and are used under license.