The following morning after Eugene, Bertram and Tom returned, Krondike feels much better. After training with Sasha, the heroes spend the rest of the day preparing for the next days foray to the southern end of the island and the looming mountain there.

Exploring the local Flora and Fauna 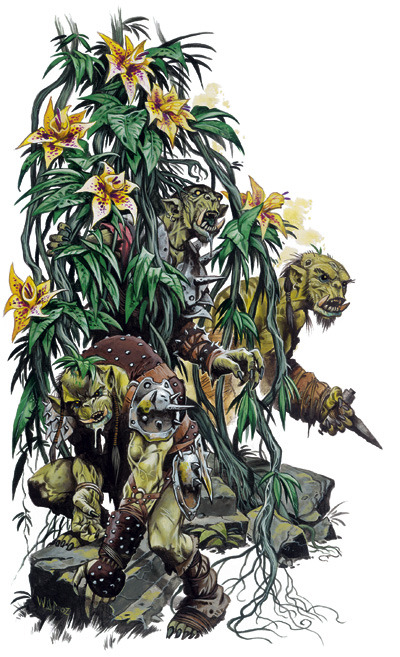 In the morning the heroes trek though the familiar path the boats and descend the boats. A few hours of boating along the shore of the lagoon, some spot a camp on the beach. Also on the beach is a humanoid figure. After landing, Krondike shouts out at the figure who turns and immediately begins to shable towards the party. It turns out this was a yellowy zombie of somekind. The camp itself is empty and ransacked. A path winds from the camp into the jungle. The group decide to follow the path which is fairly easy to traverse. Shortly after leaving the camp they come up to a crossroad. Bertram who's on point decides to turn left. The path leads them to a clearing with two more zombies and an ominous plant which clearly has decided to feast on the interlopers. After a quick battle, the plant and zombies lie lifeless on the ground.

Since the left path was obviously fruitless, the party decide to take the right path. While travelling on the path Bertram spots a nasty trap, which clearly could not have been set up by the survivors of Jenivere, perhaps by the mentioned natives? The trap is sprung harmlessly and the group continues along the path, to find themselves at another crossroad.

When not knowing where to go, go left is Bertrams motto so the group turns left again, what could go wrong? After a while they encounter another trap which everyone crosses harmlessly and after that, Eugene sets off the trap. The trap is then fake reset as a harmless trap. After the trap, the path continues onward and ends up to a half-decent shack. The inside of the shack is empty but bloody. After a moment of rest, Krondike and Eugene spot that a mile a way is a hill. Remembering the treasure map Ishirou showed them, they convince others that it's a good idea to climb up to the hill to better see the surrounding terrain. An arduous task of trekking through the jungle begins. It takes the rest of the day to get halfway up the hill before the group decide to head back to the shack for a good nights rest. On their way back a huge snake bites Eugene but after a while of fighting the snake is killed. After feasting on the grilled snake, the party rests at the cabin, Eugene suffering especially from the vicious mosquitos of the island.

The next day the journey up the hill continues. After a half-a-days hacking through the jungle, they emerge at the top of the hill. At this point Eugene and Krondike remember that you need to be at dawn on the hill to see where the hiding place is. Tom manages to find the right place based on the clues and calculating the position of the sun in his mind.

Now that the position is know, Krondike begins a furious shoveling. Even the heat of the midday isn't enough to deter this determined brute from the promise of treasure. Sure enough after an hour of digging, a wooden platform is found beneath the ground. Digging around for a few more hours, reveals a 10-foot diameter wooden platform that covers up something. As the fastest way of getting through something is to smash it, Krondike get's to work. After minutes of smashing, the wooden platform gives away and tumbles down to the darkness of the pit with a splash. As the the drop is significant, the party agrees that Bertram, being the best armoured, is lowered down on a rope to see what's down there. After 60 feet, he finds murky foul water. To find out how deep the water is, he is lowered even more. After being neck deep and not reaching the bottom he yells stop. At the same moment two Lacedon's grab on to him and the rest of the party, mainly Kron, begin to switfly pulling him back up. Betram swings his sword and slashes one Lacedon and elbows the other which drops back down with a splash. It quickly starts to climb up the side of the shaft to recatch it's prey. The other Lacedon bites Bertram in the neck and he feels as the magical poison paralyzes him. Eugene fires a bolt at the climbing Lacedon but misses as Krondike hauls Bertam over the shafts edge. Too late to save Bertam though as the Lacedon, lavishing it's helpess prey, sinks it's teeth to Betrams head and crushes the skull to get to the juicy brain within. Krondike and Tom quickly charge in and Eugene drops his crossbow to draw his weapons to flank the Lacedon's. After a quick skirmish the Lacedon's lie motionless on the ground. The rest seem not to have suffered injuries, save a scratch Eugene got from one of the Lacedons.

After the fight Krondike and Eugene work together to retrieve the treasure chest from an underwater tunnel within the pit. The treasure is substantial both in coin and valuables as well as heavy.

The group lessened by the departure of Bertam, relieve him of his wordly possesions's. Much to Krondike's amazement, the shiny warhammer refuses to part Bertram's possession. In the end the Lacedon's and Bertram are given a quick burial by dumping them to the pit. Afterwards the remaining adventurers return to the shack for a good nights rest. In the morning Eugene is feeling terrible, feverish and aching all over.

Souls for the Smuggler's Shiv