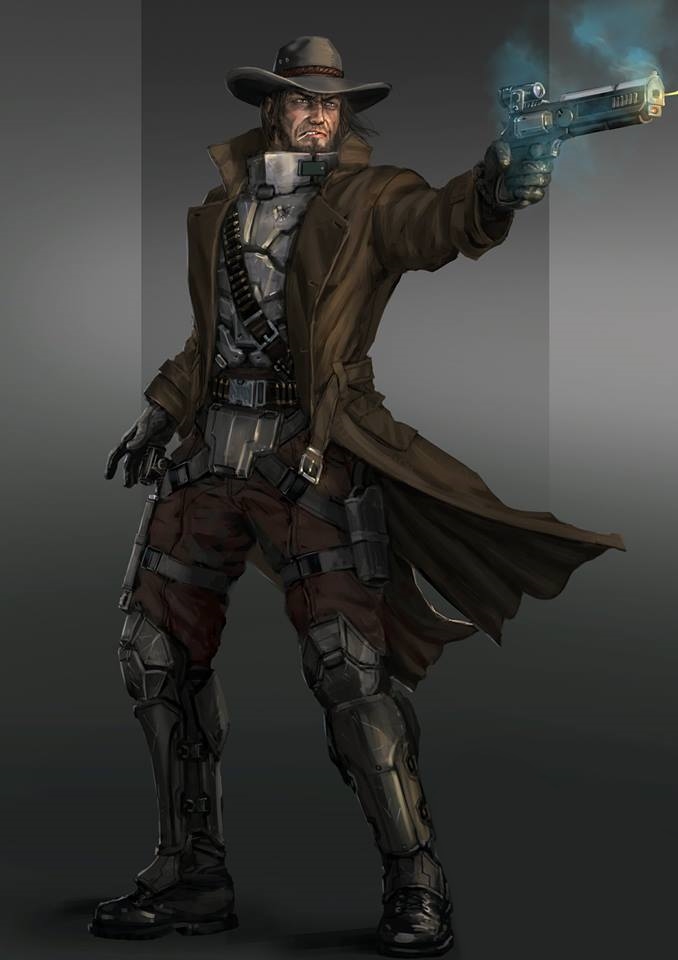 "Hmph, bone-dry... again", he noted, turned away from a ramshackle well, and dusted his leather gloves together. "No water this time either, buddy. We have to move on."
A spectator might think this man had gone mad, talking to his horse. The man wore a sand brown duster, a red scarf around his neck and over his mouth. He put a worn brown brimmed hat back on his head, after gazing to the horizon for a while, his green eyes sharp as those of an eagle. As he walked back towards his horse, it neighed silently as if it understood what the man had said. He scaled back on the saddle, turning their stride further towards north, to the border of Nex, leaving behind an abandoned shack and the well they had visited. They had to find a settlement, their drinkable water was running low, and you don't want to end up lost in the middle of Spellscar Desert without any water, at least.
In fact, nobody would want to end up wandering aimlessly in that desert, but he had had no choice, and even less time to pack. He had been framed as a criminal of the highest priority. And for what? He was an outsider in Alkenstar, not native in the region, so it would be easy to whip up such lies. They said he had killed a merchant. And not just any merchant, but a gunsmith, and stolen his pistol, along with its maintenance kit, and most of all, several blueprints of making firearms from scratch! It was true, that he, an outsider had a gun, and he did in fact have in his possession a few blueprints, but all were handmade by himself! He had come to Alkenstar years ago, and he had been working as an assistant to the very same merchant he was now framed to have murdered. He had been a valuable assistant at that, and had gained the merchant's trust and friendship. The merchant had taught him the basics of gunsmithing, and eventually he had built his very own pistol, out of blueprints he had drawn himself! Then one day, out of nowhere came a gang of outlaws through the city, thrashing the marketplace before they were driven out. In the chaos, the merchant god shot and died soon after. The locals were quick to judge that he, being an outsider, must've killed the merchant and taken the gun he now had resting over his hip. In Alkenstar people are very protective about the secrets of gunsmithing, for a reason. Someone had seen him stuffing blueprints into his backpack earlier and came shouting about: "Murderer! Thief and an assassin! He stole gunsmiths's wares! Get him!" The man knew, that he wouldn't have a chance at negotiating his way out, so he picked up his pack, jumped on his horse and together they ran, into the desert.
That was months ago now, by now people might have forgotten his "crime" he had never committed, and because Spellscar Desert was so hostile place, people might think he had died already. So he decided to brave the chance to seek out an inhabited settlement, for refreshments and tools. But he had to be careful...