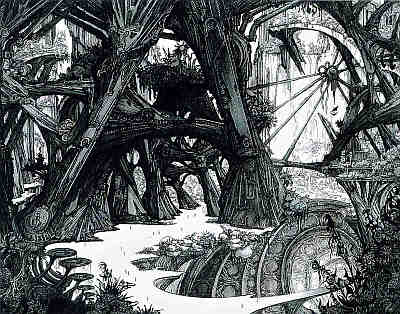 The Immortal Principality of Ustalav lies on the northern shore of Lake Encarthan, a grim bastion of civilization amid the barbarian north, where a harsh landscape and a history rich in tragedies inspire a wary population with skepticism, religious devotion, and superstition. A conglomeration of loosely affiliated counties, each run by feuding nobles vying for power and inf luence, Ustalav is a pitiful shell of its former glory, before it was subjugated to centuries of slavery at the hands of the Whispering Tyrant’s undead armies. While the nation’s upper classes struggle to compete with the very nations that abandoned them to fend for themselves after the Whispering Tyrant’s defeat, the average Ustalavic citizen has it much worse.

Hundreds of years of subjugation and the residual horrors that plague the countryside have left the people of Ustalav suspicious of magic, religion, foreigners, and their fellow citizens. Beyond their eccentric and insular qualities, Ustalavs often have a dour worldview. They resign themselves to lives of suffering, seeing nothing in their people’s history to suggest there is any hope for a better life. Despite the physical and psychological strains upon its populace, Ustalav nevertheless fosters extremely hardy and tenacious stock: men and women who firmly believe that no matter how bad it gets, history shows it could always be worse.

Although Ustalav has little to offer its rural peasants, inhabitants of its many metropolitan cities fare somewhat better, and the centers of learning and culture they provide draw trade and travelers from throughout the Inner Sea region. The capital, Caliphas, stands on the banks of Lake Encarthan, and its fog-shrouded streets host some of the nation’s most esteemed centers of trade and academia. In the north, the city of Karcau boasts a thriving culture of music, theater, and other fine arts, and its opulent architecture rivals the excess of even the most exotic Taldan palace. Meanwhile, Ustalav’s northwestern counties have broken from aristocratic rule and formed their own local, democratic government without nobles, calling themselves the Palatinates and providing a glimmer of hope for the downtrodden people of provincial Ustalav. It is here, in the Immortal Principality, that the Carrion Crown Adventure Path takes place, and as you travel through the various counties, your character will rise from a simple pallbearer to the potential savior of the nation. As internally varied as a nation can be, Ustalav is your new home, and the possibilities for fame, fortune, and influence are as thick as the fog that creeps across the windy moors at night.